Many thanks to Alison McRae, Senior Director at Glasgow Chamber of Commerce, and Rebecca Ricketts, Campaign Lead for Plate up for Glasgow, for providing the content below.

Food waste currently poses a bigger risk to our climate than the well-known climate criminal, discarded plastic. Alarmingly, one third of all food that is fit for human consumption does not even make it onto our plates.

Glasgow Chamber of Commerce identified the growing potential for innovation within the food and beverage industry through an increased focus on sustainability after a report commissioned by its circular economy initiative, Circular Glasgow, in 2016. Having looked at multiple sectors within the city, the report identified that the hospitality sector was particularly well placed to benefit from the introduction of circular production practices.

Circular Glasgow initially found groundbreaking success in increasing the sustainability of the sector through a pioneering partnership between Aulds Bakery and local brewery, Jaw Brew. Together, after months of trailing varying malt rations, hop strain, and timings, the two finally created Hardtack, an award-winning circular beer created from Aulds Bakeries’ unsold morning bread rolls that would have otherwise gone to waste.

Since then, innovation and collaboration have continued to play a key role in increasing the sustainability credentials of the sector and, to keep momentum going, in 2021 Circular Glasgow teamed up with the city’s hospitality industry, led by Eusebi Deli, to launch Plate up for Glasgow – showcasing the circular business opportunities available to the sector during COP26.

Plate up for Glasgow saw more than 40 of the city’s much-loved venues create at least one low-waste menu option. In total, more than 4,190 ‘Food Hero’ dishes and drinks were ordered and saved from landfill during the campaign.

Dishes and drinks throughout the five-week campaign included the “humble” cauliflower with almond pesto and Mossgiel ricotta from Eusebi Deli, which used the whole cauliflower from its leaf right through to its core; pig head croquettes with fried egg, capers and anchovies from The Duke’s Umbrella; and Spare Parts – a zero-waste beer by Drygate, brewed using surplus ‘waste’ bread which acts as an aid to fermentation.

The event mirrored the ambitions of COP26 in reducing greenhouse gas (GHG) emissions and identified the need to help rebuild the hospitality sector post-pandemic through green recovery. With food waste costing the Scottish hospitality sector approximately £212 million each year, equating to an average of £10,000 per business annually, the event demonstrated how the hospitality sector could begin to make key changes to business models to support sustainable ambitions while benefitting financially and unlocking new opportunities.

Rebecca Ricketts, Campaign Lead for Plate up for Glasgow said:

“It was so encouraging to see how the campaign was embraced by everyone, from the chefs and front of house to local suppliers, city stakeholders and consumers.

“When the campaign phase of Plate up for Glasgow ended, 88 per cent of venues remained committed to keeping their low waste offering on the menu, demonstrating the positive long-term impact in reducing Glasgow hospitality’s food waste output.”

Supporting the Scottish Government’s ambitions to reduce food waste in Scotland by 33% by 2025, Plate up for Glasgow acts as a blueprint for other cities and regions to consider addressing their own food waste and net zero targets. With interest already expressed from the City of Dundee, Ayrshire, Arran and the Scottish Highlands, funding is now being sought to support the roll-out of a wider national campaign, inspiring long-term change in hospitality practices and consumer behaviour. 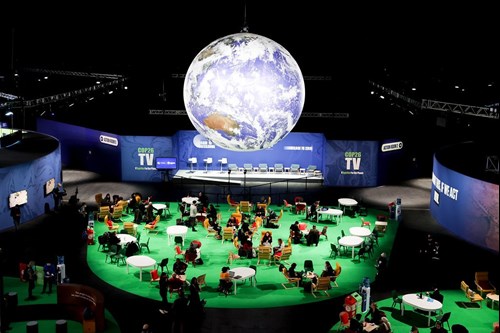 Looking ahead, Glasgow Chamber of Commerce continues to drive the city’s renowned name as a climate capital of the world. During COP26, it was in Glasgow where nations collectively agreed to reduce carbon emissions, so the rise of average global temperatures can be limited to 1.5°C. That will go down in history and, as the last few years have shown, food and drink is going to be a huge part of that movement.

Now, under the banner of ‘Climate Chamber’, Glasgow Chamber of Commerce, on behalf of the British Chambers of Commerce network, is pressing forward with plans of action to help members and businesses tackle their own climate challenges.

Alison McRae, the Chamber’s Senior Director, is responsible for driving the Climate Chamber work, and argues that all types of businesses, from international corporations to SMEs and micro-business, played a more significant role during COP26 than at any previous United Nations Conference of Parties (COP), making imperative that this engagement is maintained, expanded and accelerated.

She said: “Our ambition is that the Climate Chamber becomes the brand for the UK Chambers of Commerce and for our overseas engagement, and that it is firmly established and recognised as a critical part of the COP26 legacy.

“It cannot simply be an ‘echo chamber’ for those who already appreciate the climate dangers and challenges. What we need is action that encompasses every kind of business, so that they are doing what they can to tackle climate change. One of our roles is to help them find the tools that they need and also to showcase their experience to inspire others using the convening power of the Chamber networks.”

To learn more about Plate up for Glasgow and Circular Glasgow’s work, and to find out what steps you can take to support sustainable and circular ambitions, please visit the Circular Glasgow website.

If you have any questions about your sustainability obligations or marketing the greener aspects of your business, please contact us to find out how we can help you.